Unearthing new dreams: Alex prepares for a future in nursing 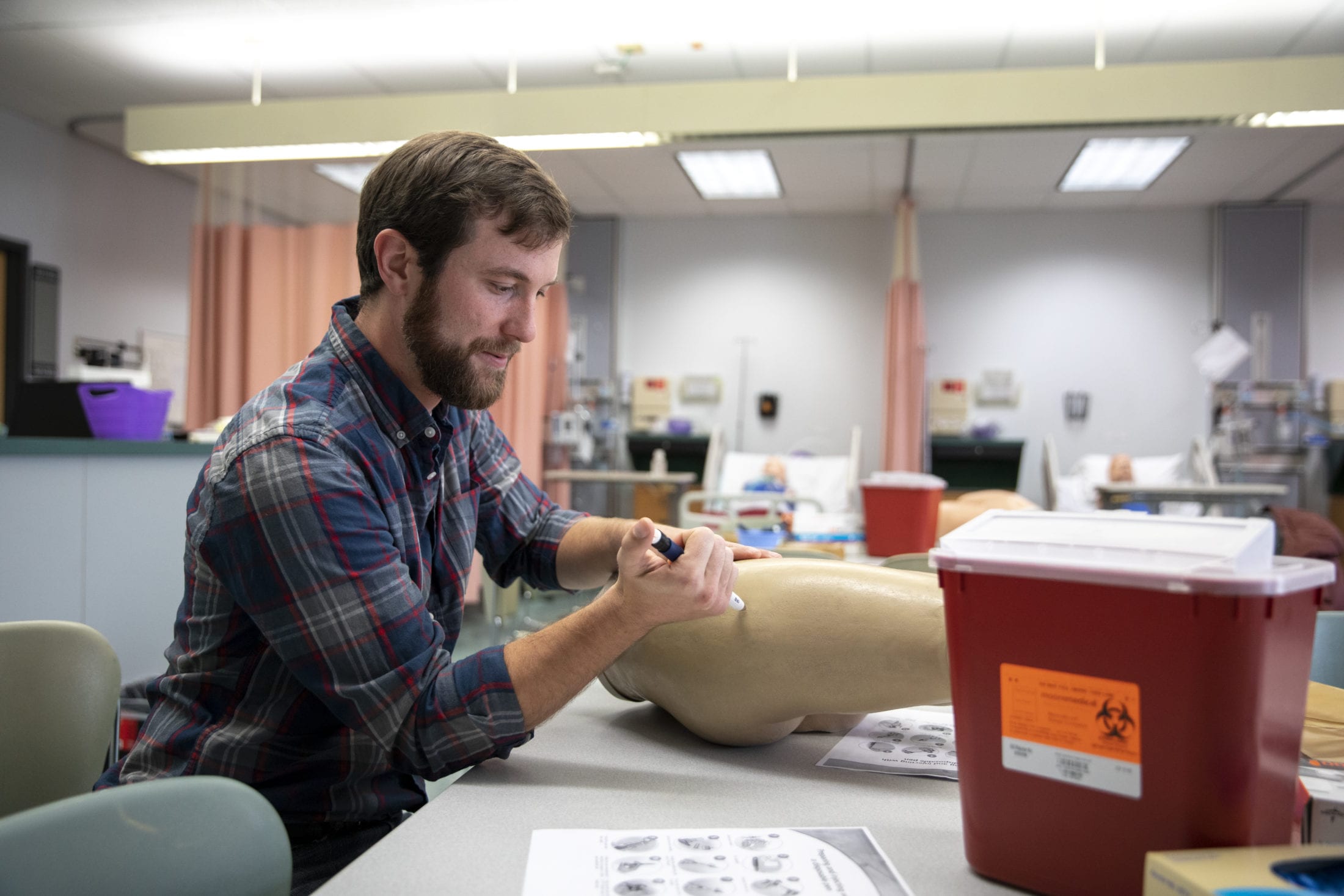 Sometimes dreams and goals must change. That doesn’t mean that those dreams were failures, but life often sends us in different directions that change us as well.

Ever since he was a kid in Central Massachusetts, Alex Button wanted to become an archaeologist. He started digging in the dirt early during an internship as a high school freshman, and went on to live his dream: earning a bachelor’s degree in archaeology from Binghamton University and working at BU’s Public Archaeology Facility.

He enjoyed his job, and had the opportunity to travel all over the state. But as a field, archaeology has its ups and downs, and what worked so well in his 20s didn’t prove as good a fit for a married father of two. And then, two years ago, he received shocking news: His workplace would be hit with layoffs.

“We had just been scraping by,” said Alex, whose children are 2 and 4 years old.

Although he didn’t get cut himself, he made a decision: to go back to school and find a more stable career. While he had no personal experience in healthcare, he opted for SUNY Broome’s Nursing program. After a year of taking pre-requisites in the Health Studies program, he is now a freshman.

Click here to learn more about our Health Studies program.

Click here to learn more about our Nursing program.

“I took anatomy and physiology. That was my first foray into the hard sciences since high school,” he said. “Then I jumped into biology and chemistry. It really clicked.”

He was off to a strong start – so strong, in fact, that his professors encouraged him to become a tutor, starting with anatomy and physiology. Now he helps his peers master biology and chemistry, and also tests his newfound skills outside the classroom in clinical rotations.

He and his peers did a month of rotations at a nursing home, followed by UHS Binghamton General Hospital. It’s an intense experience, but the intensity is what makes it so valuable.

“The little things are some of the hardest – patient interaction and the culture of the unit has taken the most adjustment. I need a lot more practice,” he said.

Nursing might seem far afield from archaeology, but they have some factors in common. They aren’t desk jobs, and they often involve coordinating with teams and solving interesting problems. Long-term, he envisions himself working in a hospital – perhaps in intensive care – and maybe someday going into a family practice.

“I really like the idea of the excitement and the fast-paced nature of a hospital,” Alex reflected. “I love people. I think there is such value in the uniqueness of all people. Being part of a team matters too.”

The team mentality also extends to SUNY Broome. When he returned to college, Biology Professor Diane Kelly made an indelible impression: tough, but deeply aware that she is training the community’s healthcare providers – including ones that may provide her own care someday.

For many students, that team also includes family and Alex is no exception. He’s incredibly grateful to his wife, who encouraged him to treat school like a job and attend class full-time.

Perhaps surprisingly, he has found his second time at college easier than the first, when he was 18 and living on his own for the first time.

“Coming back to school as an adult has been so much easier. The professors pay a lot of attention to students and they are accessible,” he said. “It makes me wish I had considered a community college before a four-year institution.”

Click here to learn about adult learners at SUNY Broome.