Modeled after the Food Network’s reality cooking show, SUNY Broome students competed in a mystery basket style tournament with each round correlating with a different course. “Chopped is by far one of my favorite shows. I was watching an episode last night and was amazed at how the chefs can prepare such incredible meals off the top of their heads in such a short amount of time. Now l get to be amazed in person,” said Jason Garner.

Director of Student Activities, Dr. Nick Wagner served as the emcee for the event with Associate Dean of Hospitality and Culinary & Event Center (CEC), Chef Michael Stamets stepping in as the kitchen moderator. Chef Stamets assisted the competitors with getting acquainted with the kitchens and provided timing reminders throughout the competition. The competitors were divided into four teams: The judges were treated to appetizers ranging from Dominican inspired shrimp over rice, to sautéed shrimp with a pea puree. During the comment portion of the event, the teams received feedback regarding each dish’s presentation, portion, composition, and flavor. At the conclusion of “Round 1” the blue team was chopped. In the second round, the three remaining teams prepared Coconut Milk Lo-Mein with Lime Chili Chicken, Coconut Ramen with Spicy Chicken, and Coconut Curry Chicken with a Crunchy Ramen Topping. Round two feedback included everything from “this meal is worthy of any restaurant in the area” to “please don’t use a bay leaf as a garnish.” There was a definite struggle to come to a decision, but at the conclusion of “Round 2,” the orange team was chopped. The green team and the red team were the final two groups to reach the dessert phase of the competition. In the short time allotted, they prepared Triple Layer Cake with Peanuts, Chocolate, and a Berry Tofu Whipped Filling and Dark Chocolate Silken Tofu Mousse with Mixed Berry Compote and Toasted Cake Topping. Each judge fully finished both dessert portions and hunkered down to make the final decision as to which team would be chopped and which team would be named the winner. After calculating the points awarded for each round, the green team was awarded the title of “Village Chopped Competition” champion! As their prize, the green team received a commemorative “Village Chopped Competition” wooden cutting board. Everyone in attendance agreed that this competition was the perfect way to end the week.

“As a foodie, this is such a fun event for me. And of course, the more students that we can get in our kitchens, the better! I think that it would be really fun to do a faculty/staff Chopped sometime in the near future,” said Dr. Drumm. 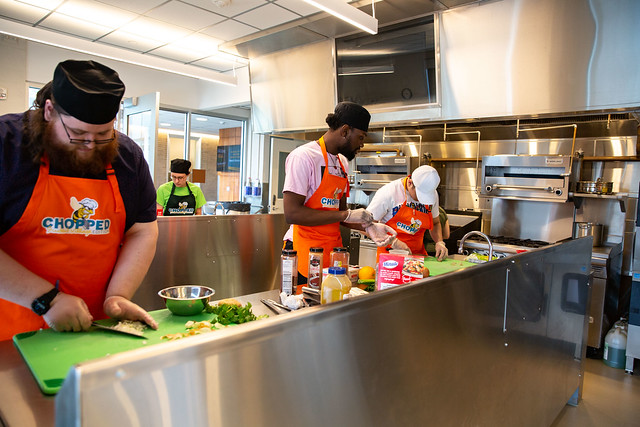