Future forward: SUNY Broome welcomes the Chancellor and celebrates the opening of the Calice Center Once the oversized scissors sheared through the ribbon and smiling faces captured for the camera, SUNY Chancellor Kristina Johnson knew exactly what she wanted to see.

She followed Dean of STEM Michele Snyder through the vibrant halls of the newly opened Paul and Mary Calice & Mildred Barton Advanced Manufacturing Center, past the metrology lab, the soldering lab – as a professional engineer, she knows such facilities well – and sundry classrooms. She made sure to stop in the food processing and fermentation lab for a conversation with Chemistry Professor Howard Trimm and took a quick glance at the simulated clean room down the hall.

Upstairs, in the Sustainability Sandbox with its bevy of future engineers, Dr. Kristina Johnson was in her true element. She chatted with Professor Robert Lofthouse’s Engineering Science students about their projects, which showcased energy conservation and green energy.

Green energy – a particular interest of the Chancellor — is a major component of the Calice Center. Patrick O’Shei, the director of market development for the New York State Energy Research and Development Authority (NYSERDA), recited the specs: Under the Quad, 36 wells drive the Center’s 100-ton geothermal heating and cooling system. On the roof, 133 kilowatts worth of solar panels collect the energy from the sun. 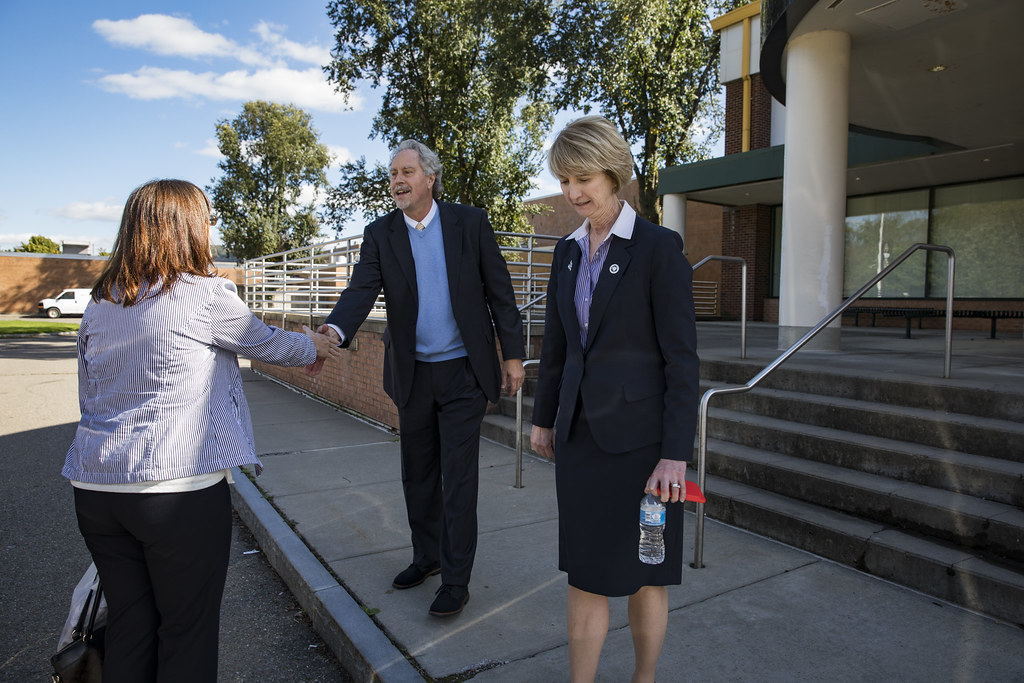 All told, the Calice Center will keep 135 metric tons of greenhouse gases from entering the atmosphere this year, all while saving money on utilities and educating students on green energy, SUNY Broome President Kevin E. Drumm said.

The Sustainability Sandbox is the educational component of energy conservation, providing an interactive classroom space where students can learn firsthand about the renewable energy powering the building – and plan future conservation efforts through a green revolving fund. On Oct. 16, Engineering Science students eagerly demonstrated their work to the Chancellor.

“It’s sensing whether or not it’s plugged into a phone or a laptop,” said student and green energy intern Diana Kelly, explaining one experiment that dealt with “vampire energy,” the electricity that many devices use when they are off but still plugged in.

Dr. Johnson, who co-founded a clean-energy and infrastructure company and once served as Undersecretary for the U.S. Department of Energy, expressed an avid interest, and even encouraged students to follow up with her on the results of their work.

“Do you know how much vampire energy is wasted in the U.S.? Enough for seven nuclear power plants,” the Chancellor said. “If you solve this problem, it will be phenomenal!” And then, an aside with a smile: “Just make it cheap.” The SUNY Broome community welcomed the Chancellor to the grand opening of the Calice Center, the very first time she visited the campus since her inauguration. Joining in the celebration were partners integral to the success of the project, elected officials, industry and workforce leaders, local educators and even a chemistry class from Chenango Valley High School who are earning college credit through the Fast Forward program.

Alumni also took part and provided the memorabilia on display in the airy new atrium, including one of only 15 jackets made for the “electricals” – as Engineering Tech majors were once called – back in 1950. In addition, the Broome Community College Foundation contributed $3.4 million. This funding was made possible by the historic $11 million estate gift in 2014 from the late Emil Calice, who stipulated that any building that received funding from his estate would bear the names of his parents, Paul and Mary Calice, as well as his long-time friend, Mildred Barton.

The name change, while it pays homage to Mr. Calice’s loved ones, also shows the evolution of technology and the Southern Tier’s economic base through the decades.

Built in 1956, the Mechanical Building offered a direct view of how the 1950s looked in education, noted Broome County Executive Jason Garnar, a SUNY Broome alumnus who attended the school in the late 1990s. In fact, when Executive Vice President and Chief Academic Officer Francis Battisti took classes there in the 1970s, it was already known as an old building. The following decades hadn’t been kind. Its original name was a nod to its purpose: training students to become engineers and technicians, using the post-War technology of the day, President Drumm explained. The Southern Tier was a manufacturing hub then, home to IBM and Endicott Johnson shoes, and many people relied on jobs that used both their hands and machines.

Technology has changed dramatically over the college’s 70-year history, and so has the Southern Tier’s manufacturing base. These days, manufacturing relies increasingly on computer programming and robotics, and requires more than a high school diploma.

“There are still great jobs in the field, but you need an education – and SUNY Broome can help you get there, just as it has for the past 70 years,” Dr. Drumm said.

The original Mechanical Building also didn’t cover an industry central to Upstate New York: food production. The Southern Tier is a major food hub for the entire state and indeed the entire Northeast, and food manufacturing is one of the region’s most significant industries, according to the Department of Labor. “This project is surely a sign of progress for our community – growth and progress,” said Assemblywoman Donna Lupardo, noting that its food processing labs connect thematically with another project under way in downtown Binghamton: the transformation of the historic Carnegie Library into the SUNY Broome Culinary & Events Center.

Broome County currently has 4,000 open jobs and facilities such as the Calice Center play an integral role in addressing these vacancies, while providing local residents needed opportunities, the county executive pointed out.

“This building is going to train the workforce we need today,” Garnar said.

During her first visit to the SUNY Broome campus, Dr. Johnson noted that the Calice Center fits the three themes of her chancellorship: innovation, sustainability and individualized education.

“This is how we’ll be competitive globally. This is how New York can be a leader,” she said, explaining the importance of the three themes. The project also touches upon an additional theme that she included in her State of the University Address: partnerships, linking philanthropy with government, private support and the SUNY system in addition to SUNY Broome. One partnership in particular made a massive impact on the college, both in terms of the Calice Center and in the 80 scholarships made in his name to SUNY Broome students every year.

“This extraordinary building wouldn’t have been possible without the visionary support of Emil Calice,” said the Chancellor, adding that he, like her father, was a World War II veteran. “I think he understood that this is the community’s college.”

While he advanced his career at IBM through continuing education and courses at several colleges, Emil Calice never graduated from SUNY Broome. In fact, the Broome Community College knew little about him until his passing and the historic estate gift, the largest ever presented by an individual to a SUNY community college, noted Margaret Turna, president of the Broome Community College Foundation.

Paul and Mary Calice were hard-working Italian immigrants who ran a corner store in Binghamton, while Mildred Barton, Emil Calice’s companion of many years, was a passionate naturalist, gardener and philanthropist. Emil Calice – known as “Sonny” to friends and family – served in World War II with his brothers, spent his entire career at IBM and was known as an avid ham radio operator. His family remembers him as a deeply generous man who never spent a dime on himself, Turna said.

“It’s deeply moving to all of us that Mr. Calice wanted his legacy to be about other people, and not about himself,” she said. “That’s true when you’re talking about all those life-changing scholarships and this much-needed facility – which is named after the people that Mr. Calice loved.”