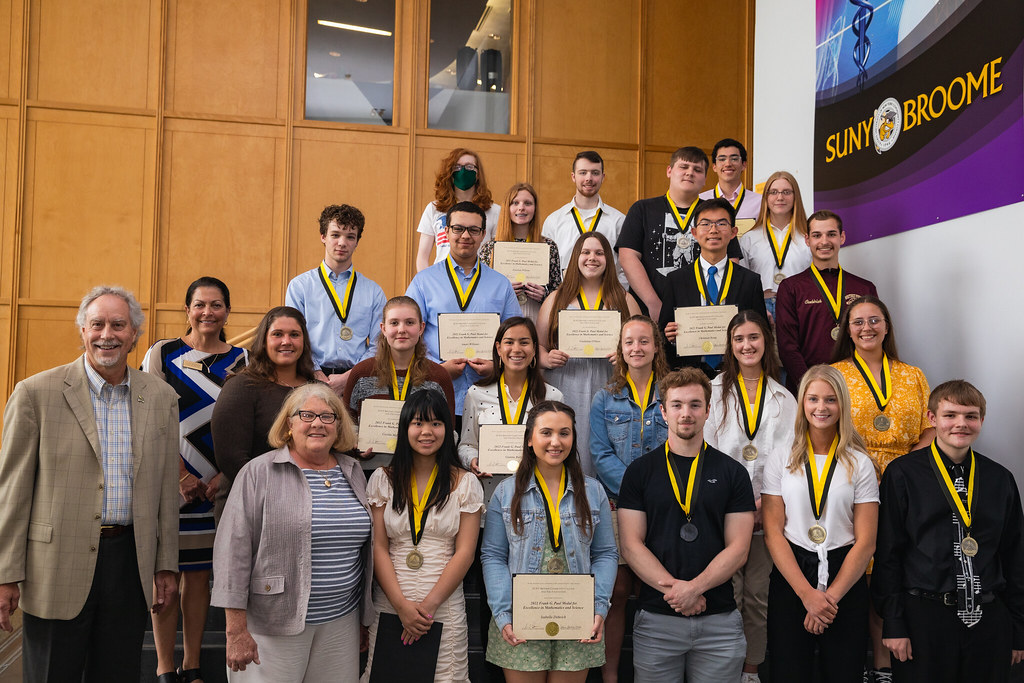 View photos of the award ceremony.

President Drumm said that the event is held to “celebrate and recognize the hard work, sharp minds, and the abilities of our next generation. The high school students gathered in this room today are the best the region has to offer when it comes to math and science.”

Following Dr. Drumm’s remarks, Dr. Penny Haynes spoke briefly, noting, “Since the inception of this program in 1999, the Foundation has awarded just over 700 medals to the area’s highest achieving high school seniors. This recognition helps to showcase the talent of our local students with exemplary math and science abilities.” During the ceremony, Rebecca Komorowski recalled her father’s most amazing story. As a young man during World War II, Frank hoped to become a pilot. However, because he had two different colored eyes, his dream was dashed, and instead, he was assigned as a navigator. While flying over dangerous territory at night, Frank and his pilot had to avoid detection by the enemy. They killed all of the lights on the airplane and proceeded in darkness. Frank used his familiarity with the constellations to keep the aircraft on course. Rebecca shared this story to showcase her father’s intelligence and remind students of the importance of education.

While Rebecca became a nurse instead of directly following her father’s footsteps, she noted that she’s tried to embody her father’s dedication to education and to give back in her own life.

The program is made possible with very generous financial support from Frank and Lillian Paul and their family. The Medal of Excellence’s namesake, Frank G. Paul, spent more than four decades as an IBM engineer and believed in math, science, and education. He also served as a SUNY Broome trustee and president of the Foundation, which provides scholarships to many students.

This year, a record-breaking 39 high school students were honored. The recognition includes a medal and a cash award for the top-scoring male and female students in math and science from area schools. Additionally, medal recipients planning to attend SUNY Broome are considered for the Francis and Lillian Paul Scholarship for SUNY Broome’s STEM program. The merit scholarships are worth $1,000 per year at SUNY Broome, and recipients may also be eligible for a $1,000 transfer scholarship to complete their bachelor’s degree if the criteria are met. This year’s scholarship recipients are Sydney Velez Mattiace, Lorena Iosub, Luke Czebiniak, and Alejandro Chavarria.

Alejandro Chavarria, who will be graduating from Windsor High School and plans to study Engineering Science at SUNY Broome, told an interviewer from Fox 40 News that he’s been encouraged by receiving the medal and prize. “It’s kind of like a pat on the back, like that you’ve been doing a good job. Then the fact that it’s coming from Broome – given that I will be attending Broome – it’s kind of a nice token of it,” he remarked.

Gianna Rullo, a Chenango Forks senior, told a News Channel 34 reporter that it was an honor to be recognized for her hard work. She plans to combine her math and science skills with her love for art and “going to Syracuse University for architecture…I kind of put everything together and found that architecture was the career for me.”

This year’s medal recipients, listed by high school, are:

Congratulations to all of our recipients!

View News Channel 34 or Fox 40’s coverage of this event.

If you would like to learn more about SUNY Broome scholarships or how to create a legacy of generosity to assist SUNY Broome students, please contact the Foundation at 607-778-5182 or at foundation@sunybroome.edu