The hybrid van team from the local chapter of IEEE

Drones and robots. Swinging pendulums. Electronic games. A juiced-up electric van that will blow away the competition – hopefully – on the race course.

These are just some of the projects undertaken by SUNY Broome’s Engineering Science students. They had the chance to share their hard work Feb. 22 at an Engineering Open House, in celebration of National Engineering Week.

“It’s a chance to celebrate engineers and the work that they do,” said Professor Robert Lofthouse, chair of Engineering Science and Physics. 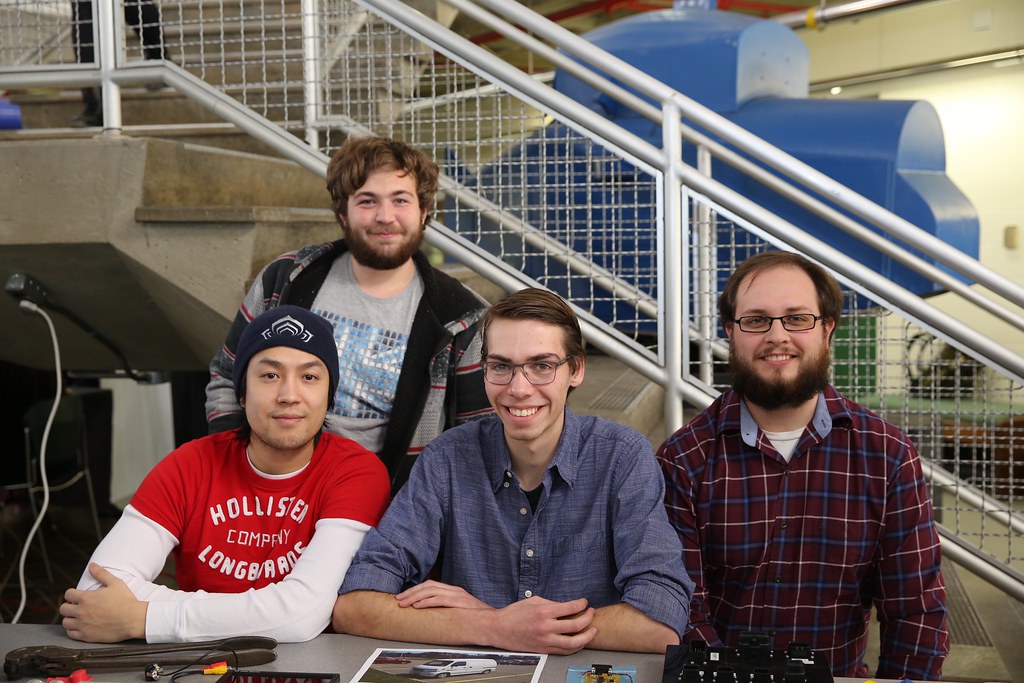 Engineering science majors Inam Ullah and Ethan Zaweski demonstrated the projects they built in their micro-processing course: a pair of small vehicles able to detect obstacles and either stop or reverse direction. Nearby was a drone project they were working on with other team members.

Both plan on studying civil engineering, most likely at SUNY Stony Brook, they said.

Engineering science majors Sean King and Tyler Klossner also showed off their micro-processing work: an electronic version of Yatzhee, formed of chips, wires and switches. Both are planning on careers in computer engineering.

“It’s a virtual version of the classic board game,” King explained. “It’s a fully working game.”

“Flip the switch to roll the dice,” Klossner said, indicating the row of five solver switches. Computer science student Mike DiGiacomo and his team – members of the local chapter of the Institute of Electrical and Electronic Engineers (IEEE) – couldn’t bring their project into the room. That’s because it’s an old van, which will be getting new life as a green racer.

The students are taking an electric van formerly used by the maintenance department and retooling it with more efficient lithium batteries, DiGiacomo explained. They’ll also be making the boxy white vehicle more aerodynamic, replacing the side-mirrors with cameras.

“The end goal is to compete in Toyota Green Grand Prix,” DiGiacomo said. “The competition is April 7 at Watkins Glen.”

It features two main events. One requires the green vehicles to drive 100 miles at an average speed of 45 mph, while the other consists of autocross, a timed competition that has drivers navigate through a defined course. Good thing Mike is an experienced driver: Last year, he was behind the wheel of the Green Machine, an electric car built by both Binghamton University and SUNY Broome students.

He can add media star to his engineering credentials as well, after he was interviewed by Fox 40 for a story on the Engineering Open House.

“This event is huge for us,” he told the reporter. “This is really a good way for us to put ourselves out there, and to get more exposure for the event and for our program.”