Hours before opening, The North Brewery is quietly busy, with silver vats in the back turning hops and other ingredients into the Endicott establishment’s award-winning beer. 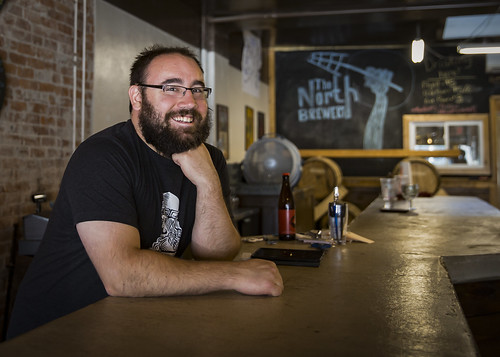 Come nightfall, however, the small Washington Avenue business will be packed with customers – eager to taste the brewery’s unique beers. God Complex – a hazelnut stout with chili peppers and a logo featuring a tyrant from history. Bottles of the Russian imperial stout called Red Label and American stout Lil Debbie. Pack of Wolves, Imperial Black Donald, Pillow Talk, Light Treason – some on tap and some in bottles, all with quirky names and a devoted following.

Now in its fifth year, The North Brewery has been a labor of love for SUNY Broome alumnus Zach Pedley. The Endwell native began homebrewing with his father Eric Pedley in 2008, and now the father-son duo are owners and brewers. Eric does the books and crunches the numbers, while Zach does virtually everything else, from brewing to cleaning the fermenters, marketing and designing labels.

“I wanted a hobby where I could show my creative side,” said Zach, a talented graphic artist. And brewing provides such an outlet, from the beer itself, which verges on the experimental (coconut vanilla stout, anyone?) to the chemistry behind the brewing process, to bottling and marketing. He loves it all.

A graduate of Union-Endicott High School, Zach graduated from SUNY Broome in 2008 with a degree in Business Information Management. He then transferred to Binghamton University for a degree in graphic design and marketing.

Unable to find jobs in his field, he landed a job as a Walmart assistant manager and spent three years in retail. Wanting to change his trajectory, he began saving money to open his own business – either a brewery, or a B-movie theater. The former proved more doable.

After purchasing a small building on Washington Avenue, he opened his production facility. During his first year, Zach shouldered the entire workload himself, and $1,000 in sales represented a great week. Thinking of his time at Walmart, he didn’t mind a bit.

“I had worked at a place that expected so much out of you and paid so little,” he explained. “Here, I never really considered it work because I enjoyed what I was doing.”

Now in his fifth year as a business owner and professional brewer, Pedley employs eight people, two of them full-time, and churns out 10 to 15 barrels a week in an incredibly small space. His beer is distributed across New York State and has racked up awards: Best Stout in New York State in both 2016 and 2017, according to TAP New York. The reader’s choice for Best Upstate New York Brewery in 2016, according to NYup.com. The North Brewery has been invited two years in the row to Extreme Beer Fest, and hopes to make it a three-peat.

They’re also looking to purchase a larger property in Endicott to accommodate their continued growth.

“We produce an incredible amount of beer in this little space,” he said.

While he uses hops from the Pacific Northwest and New Zealand, Pedley tries to support the area and other businesses as much as he can and participates in frequent collaborations. He pulled out one bottle with a red label as an example: Stranger in the Brewhouse, which uses coffee from Strange Brew in Binghamton.

Pedley may be young himself, but he’s also supporting the next generation of brewers. His assistant brewers often come through Binghamton University – he’s open to SUNY Broome students too, he said – and several have gone on to careers in the industry. One is making cider now, in Albany. Another is opening a brewery in Connecticut.

Washington Avenue can be a tough spot for small businesses, which come and go. Many young professionals head to the nightlife in downtown Binghamton, and don’t necessarily consider the village an option.

“It’s about creating a culture where people want to come and hang out,” he said.

And they do. Pedley’s establishment has proved so popular that he’s had to come up with a rule: one growler for person. Bottle releases see patrons lining up at 10 or 11 a.m., with the beer selling out by 1 p.m.

The North Brewery has a bit of a South Park mentality, with good-natured and sometimes pointy ribbing, Pedley mused. But it’s all in good fun.

“You can come here and always feel welcome,” he said.