Want to make a difference on campus?  Run for Student Assembly!

All positions are up for re-election:

Download your candidate packet by scanning the qr code or request a packet by emailing StudentActivities@sunybroome.edu

9/21 Packets due to the Student Activities Office by 5pm

10/1 Elections start – vote by logging into the Swarm We have partnered with TurboVote to make voting easier for everyone at SUNY Broome! TurboVote provides students, faculty, and staff with all the information and materials they need to vote in every election.

Ready to register? Scan the code or go to sunybroome.turbovote.org Student Village RA’s are hosting a friendly competition to see who can register the most residents on their floor.

Help them out —- Help YOU out!

Registering to vote ensures you are ready when the polls open. Make your voice heard!

Ready to register? Scan the code that goes with your floor: Join us for a week of civic engagement and head to the polls ready to voice your vote!

9/21 – 5pm – Student Assembly Election Packets Due
Running for office? Make sure your packets are in by 5pm!
email to: StudentActivities@sunybroome.edu

9/21 – 10/9 – Student Village Voter Registration Challenge
The SV RAs will be racing to register residents on their floor.
Join the fun! Connect with your RA today!

9/22 – 11am – TurboVote Presentation
Learn how, when, where, and why to vote!
Zoom – Get link by logging into the Swarm

9/24 – 11am – Student Assembly Campus Candidate Forum
Join the Student Assembly candidates as they share their  platforms and answer your questions!
Zoom – Get link by logging into the Swarm Got Voter Questions?  TurboVote Has Answers!

TurboVote offers voter registration assistance, vote-by-mail assistance, election reminders, and has a help desk to answer any questions you may have about the voting process.

Register to vote at sunybroome.turbovote.org. Join our political science professor (in costume!) for a discussion of and celebration of 100 years of hard-fought women’s suffrage in the United States. Find out the secret history of this movement and why voting is more important than ever. 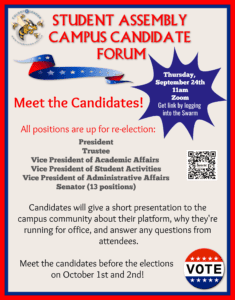 All positions are up for re-election:

Candidates will give a short presentation to the campus community about their platform, why they’re running for office, and answer any questions from attendees.

Meet the candidates before the elections on October 1st and 2nd!